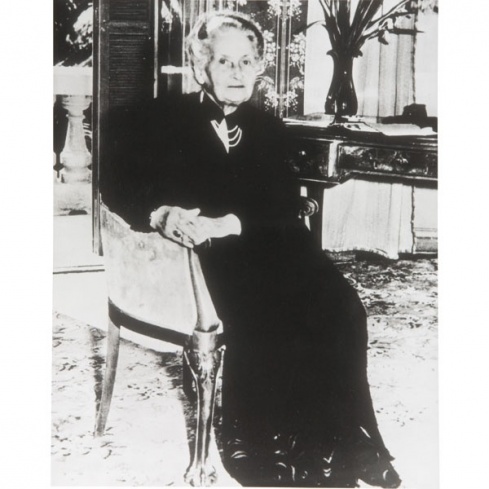 Maria Montessori was born on 31 August 1870 in Chiaravalle, Italy, the only daughter of Catholic parents, Alessandro and Renilde Montessori, civil servants and scientists.

Maria was very much supported by her mother in her life choices. She took an interest in mathematics at a young age. She moved to Rome at the age of 12, mainly in search of a better education. When she was 15, she wanted to attend an engineering school. This school, which previously just been for boys, accepted her. She stayed there for a couple of years before stopping and returning to the standard curriculum.

At the age of 18, she decided to study medicine - a subject which, once again, was only open to men. This led to a disagreement with her father who wanted her to become a teacher. The Ministry of National Education refused let her attend medical school, although she was finally granted permission by dint of perseverance. Maria Montessori became one of the first female doctors in Italy, graduating as a doctor in 1896. These university years were difficult because her classmates refused to accept her. Her rebellious nature pushed her to rise to the challenge. During her studies, she focused on psychiatry and her thesis was on this subject. Between 1894 and 1896 she spent time with mentally ill children and noted that they were not separated from adults, day or night.

Her first act at the psychiatric clinic in Rome was to separate adults and children, by means of a request made to the director of the institution. This led to the creation of special department for children.

1898 at the first educational conference in Turin: Maria Montessori reported at a conference on her 2 years of work as an assistant at a psychiatric clinic.

At the end of this conference, the Minister of National Education put her in charge of an orthophrenic school for children with sensory disabilities. The children were not mentally ill but had motor and/or physical disabilities. She was the head of the school between 1898 and 1902.

In 1898 Maria Montessori graduated with a degree in biology, psychology and philosophy. She was also a doctor and a psychiatrist. She was a social scientist, but had never been a teacher or an educationalist, yet she found herself with a school to run. She decided to go to France to learn about educational methods. She was inspired by the work of 2 doctors and educators: Jean-Gaspard Itard (1775-1835) and Edouard Seguin (student of the former, 1812-1880).

Both worked in an institute for the deaf and dumb. Seguin had come up with the idea of educational materials for them: sensory materials.

Maria Montessori copied out Edouard Seguin's book in calligraphy and translated Itard's work, absorbing Seguin's line of thought as a basis for how to present materials to children: SLOWLY and IN SILENCE to allow children to think.

Maria Montessori had the sensory teaching materials made. She taught the teachers at her school to use the materials. Very quickly, children learned to read, write and count. She therefore decided to enrol the children (many of whom were girls) in the national primary exams. Many of the children were successful and had good results.

This led to significant recognition for Maria Montessori. However, she saw this as a real problem: if children with disabilities were doing better than normal children, there must be an issue with the education given to so-called normal children!

She began to think that it must be possible to develop each child's potential. Her interest shifted from abnormality to normality, from instruction to the development of human potential.

In 1904: she became a professor of anthropology in Rome and wrote a second thesis: "Pedagogical anthropology", to be published in 1910. She continued her training.

In 1907 (until 1910): the mayor of Rome wanted to regenerate San Lorenzo; Maria Montessori was asked to be responsible for young pre-school children (under the age of 6-7). 6 January: opening of the first Children's House (Casa dei bambini). It was called a house because it was located within actual housing (ground floor of apartment buildings)

She brought the toys and equipment used at the orthophrenic school to this house. She asked the teachers to put small tables at the entrance with jugs, combs and brushes so that the children could make a dignified entrance, feeling clean and with their hair combed. It was when she observed a child in front of this small activity table that she discovered the phenomenon of concentration among children - a phenomenon which allows children to concentrate on a goal. It is this concentration which allows the development of intelligence.

The secret: when children concentrate on their activities, they become calm and socialised. This is the development of intelligence, the transformation of a child. The conclusion: children are socialised through individual work.

The goal was to find ways to allow children to focus on their activities.

After this discovery, Maria Montessori had Seguin's material remade to adapt the shapes. So she had prototypes made, only keeping those which held children's attention and rejecting the others.

Children learn alone by observation and absorption (with respect for sensitive periods). That's why we present children with sandpaper letters at 3 years old.

Children's free choices: when children know what's good for them, that shapes them. One day when the teacher arrived late, she saw that the children had settled down and had only used the equipment they needed. Maria Montessori then had child-sized shelves made.

When a child does something, even if we don't understand, we must not disturb them, but observe instead. We must not react if we want to understand or even just to think.

1909: Maria Montessori have her first national training course and trained her first teachers (writing her book ""Scientific pedagogy""). She began to pass on her knowledge. During this course, she ""found"" 2 assistants: Anna Maccheroni (music programme) and Adèle Costa Gnocci (0-3 programme)

1913: she gave her first international training course in Rome (in front of hundreds of students from around the world). After this, she continued to pass on her knowledge although she was working on both the elementary school curriculum and on materials. Invited by Graham Bell to go to the USA, she went in 1915 to give her first lecture.

1916: she went to Spain where she founded a seminary and wrote books on religion.

1929:  creation of AMI in Copenhagen, the headquarters of which were in Amsterdam, where she lived once Mussolini came to power in Italy.

1939-1946: INDIA - she is under house arrest in this country because of her Italian origins; India is a Commonwealth country which was then at war with Italy. She then took the opportunity to teach in front of hundreds of students, including mothers who came with their babies. This enabled her to observe and consequently led to her interest in children under the age of 3. She then asked one of her assistants to develop a programme for children from 0 to 3 years old. With her son, she also worked on the ""cosmic"" education programme:

At the children's home: NORMALISATION - "Help me to do it myself".

At elementary school: COSMIC EDUCATION - "Help me to think for myself".

During these 6 years, children listened repeatedly to 5 great stories. These great stories, which were repeated every year during these six years, led to different work and research projects.

This gave rise to work in all subjects; the focus was no longer just learning how to read or write. We're interested in children: they're the heart of the programme. It is based on children's fundamental needs and tastes.

Children are given an idea of who they are and where they are. They understand that they are not the first, which leads to the ideas of modesty, environmentalism, interdependence, respect for others, the land, the flora and fauna. This also conveys an idea of everyone's role on earth: everyone has a role on earth.

During this period, then, in the life of Maria Montessori there was:

After 1946: she continued to give classes and lectures (on her own during her lifetime). She gave many conferences and international conventions.

In 1952, she returned to Europe, first to Italy before choosing to settle in Holland. She died in Noordwijk aan Zee (Holland) at the age of 81. Maria Montessori's son, Mario, continued her work until 1982, when he died at the age of 83.

Today, there are more than 22,000 Montessori schools on 6 continents.

Find out more about the Montessori educational approach 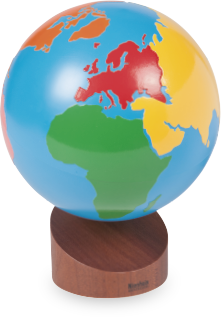 Secure payment
All your transactions are secure with 3D Secure authentication

International delivery
Delivery all over the world

Refunds and exchanges
You have 14 days to exchange your products